This article originally appeared on Madison.com and can be found here.
Chris Hubbuch | Wisconsin State Journal

Drunken driving crashes — including at least 11 fatalities — rose sharply during the first half of 2022, according to a new report.

There were 80 automobile crashes between January and June involving alcohol, 41% more than the five-year average, according to the Dane County Traffic Safety Commission, a coalition of public and private organizations working to improve traffic safety.

While the commission is continuing to analyze the data, co-chair Cheryl Wittke said the rise in drunken driving correlates with an increase in drinking since the onset of the COVID-19 pandemic in early 2020.

“There’s just been an overall spike in alcohol use,” Wittke said. 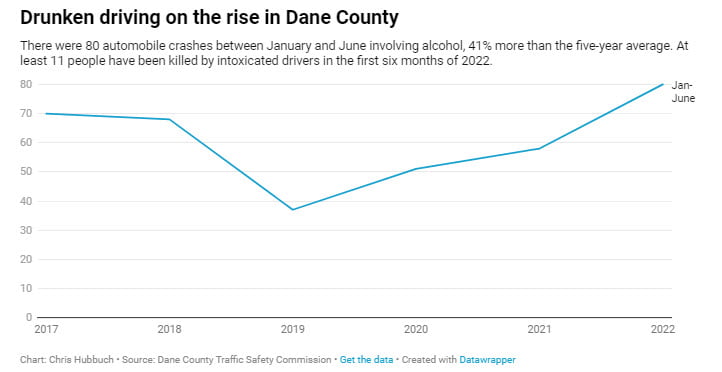 Of 16 fatal crashes this year, 11 involved drivers whose blood alcohol levels exceeded the legal limit of 0.08%, in some cases by up to three times. Wittke said the actual number of alcohol-related fatalities is likely higher because of the time it takes to get lab results on blood drawn after a crash.

Wittke, who also serves as executive director of Safe Communities of Madison-Dane County, said the commission is working on prevention strategies to be rolled out this fall. “We believe it’s preventable,” she said.

But Wittke said law enforcement alone can’t solve the problem. Across all age groups, Wisconsin has the highest rate of excessive drinking in the nation, said Maureen Busalacchi, director of the Wisconsin Alcohol Policy Project, which provides training and technical assistance to help communities address excessive drinking. And while the definition of binge drinking is generally four to five drinks in a two-hour period, Busalacchi said data show Wisconsinites are typically having nine drinks in a setting.

“We live in a state where heavy drinking has become normalized,” said Brian Dunleavy, whose 20-year-old son, Conor, was killed in 2012 when the car he was riding in was struck by an intoxicated driver going 100 mph on his way from one bar to another.

Lawren Prisk, 52, served seven years in prison for the crash. “I grew up in a household where my parents were big entertainers,” Dunleavy said. “We watched adults, you know, drinking a lot. They were all professional people. We thought that was OK.”

The Wisconsin Alcohol Policy Project has developed strategies to reduce binge drinking by identifying bars that routinely over-serve customers, as well as community festivals that overemphasize drinking. “There needs to be community support and buy-in,” Busalacchi said. “Our civic organizations can play an important role in terms of the standards they set.”

Dunleavy, a retired Madison school teacher who now lives in Milwaukee, said with the availability of ride-hailing services like Uber and Lyft there’s no excuse for drinking and driving.

“I’m not asking people not to drink,” he said. “You need to have that game plan in place before you set out on the night. Your executive functioning definitely goes south after a few beers.”

This article originally appeared in the Capital Times and can be found here.
By Allison Garfield

Dane County has seen a 41% increase in the number of car crashes related to alcohol use in 2022 compared to the previous five years, a new Traffic Safety Commission analysis found.

In total, 80 crashes from January to June involved alcohol use, compared to the previous five-year average of 57, including crashes resulting in injury or death.

While there have been 16 fatal crashes in the county this year, of those, 11 involved alcohol use.

Cheryl Wittke is a co-chair on the commission and executive director of Safe Communities of Madison-Dane County, a local nonprofit coalition of over 350 organizations working to increase traffic safety. She said the county’s trend is “disturbing” and “devastating.”

“We continue to see excessive use of alcohol as a factor in most crashes, and it doesn’t have to happen. We really can’t lose sight of the impact that the crashes have, especially on the victims and the families,” Wittke said.

Most of the Dane County fatal crashes occurred outside Madison in Fitchburg, the village of Blue Mounds, and towns of Oregon, Vienna, Dunkirk, Rutland, Dunn and Albion.

While the Traffic Safety Commission is working to determine the cause of the spike, Wittke speculated it has to do with increased alcohol consumption during the pandemic.

Alcohol is ingrained in Wisconsin’s culture; the state has the highest rate of excessive alcohol consumption in the nation, according to data from the United Health Foundation.

That also means challenges from excessive drinking appear particularly acute, as well. From 2000 to 2010, alcohol-induced deaths in the state increased by 26.6%, according to a Wisconsin Policy Forum report. Then, from 2010 to 2020, those deaths more than doubled, increasing by 115.4%.

And alcohol sales continued to climb well into the pandemic.

“As a culture, we have been drinking more alcohol during the pandemic. Already, we were consuming more previous to that, but the pandemic really amped things up,” Wittke said. “The speculation is that’s part of what’s driving the increase in in these fatalities and alcohol-related crashes.”

She said it’s time for Wisconsinites, law enforcement and local officials to “take a step back” and examine the dangerous effects of drinking and driving.

Thirteen Dane County police departments, the county Sheriff’s Office — all of which are TSC-members — have grant funding from the state’s Department of Transportation Bureau of Transportation Safety to cover police overtime for traffic enforcement efforts aimed at curbing dangerous driving behaviors.

Wittke contended much more needs to be done.

“We can’t enforce our way out of this problem. There just will never be enough police resources,” she said. “That’s what’s really exciting about the Traffic Safety Commission … we’ll be figuring out how to how to implement some strategies to address the problem.”

The upward trend is a continuation of one Dane County saw last year as well, with an unprecedentedly high number of fatal crashes in 2021 caused by both speeding and drug use. As a result, the TSC gave four task forces the job of finding solutions.

She said TSC and all its local partners will have to think creatively to address the trend, but the first step is awareness and education.

“(We’re) putting it back on the radar that this is not acceptable, and it’s definitely going the wrong direction,” Wittke said.

The city’s Vision Zero initiative aims to eliminate traffic deaths and severe injuries on city streets to prevent avoidable fatal crashes using data-driven strategy. A key policy platform for Madison Mayor Satya Rhodes-Conway, her office did not respond to questions of how the initiative intends to address the major spike in alcohol-related crashes by publication.